I have to say, this was the snoozer of most #RHONJ finales. Nothing really happened! The Envy Fashion show was boring. I did tear up when Melissa talked about feeling a tug on her pillow (the evening of her father’s death anniversary).

I think the best part was Dolores and Teresa icing Kathy out! I mean, I almost felt bad for her. Her days as a Friend of a Housewife are done.

Also, I LOVE how Siggy decided to create a mediation between the ladies and Jacqueline while she bought a pink cape! That is how you multitask/mediate in style! Siggy should go down as the smartest New Jersey Housewife in this franchise! She moved a Teresa/Jacqueline to a public place WITH security (though technically Danielle hired security when she met with Caroline… she just isn’t that smart).

So Jacqueline and Dolores made up. It was kind of a stupid disagreement anyway. No one stays mad over a text fight. I am glad Jacqueline made a seating chart for Siggy’s mediation. Who thought that telling Teresa where to sit was a good idea. Or stealing her line? “Is Bitch better?”

I don’t know why anyone would ruin a good pedi running after Jaqueline. It’s over… until the reunion next week!

YAS! I got on Watch What Happens Live this week! Though my question was a snooze. I just wanted to talk to Melissa AND Teresa. Honestly I love there answer (check it out at 5:40 after Andy congratulates me on the Cubs winning before they actually won—he IS omnipotent). Still, this whole thing was boring other than the RuPaul Drag Race Alums Lip-syncing for their WIFE!

Now THIS was a finale! From Heather’s falling donuts to Kelly’s failing sanity… the RHOC’s know how to throw down.

Let me opine for a bit about Vicki. I want to love her, but her lie last season is hard to come back from. Vicki, if you read this (and I know you won’t and if you did you wouldn’t care) your lie was offensive because it slaps everyone who ever had someone suffer and die from cancer in the face. Your boyfriend had chemo and then you took him to Mexico. THIS COULD NEVER HAPPEN!

My mother could not even go to the Chinese buffet after her chemo treatments because her immune system was shot. To carry on the way you did, acting like a martyr, was offensive. You should REALLY apologize! Go on Watch What Happens Live and throw yourself on the mercy of all who watch.

I think Meaghan is done. She is having a girl. Her friend Kelly is a sinking ship. She is disappointed in Heather. She will never be friends with Vicki. She might as well move back to St. Louis. Maybe she can bring the franchise with her?

Honestly there is not much else to say. Shannon’s party was a train-wreck! Kelly is a housewife down! When she was looking for her husband… Michael? I forget… and the camera cuts to him talking to two young ladies. The only saving grace for Kelly is she is bat-shit crazy and makes for great TV. I just feel bad for her kid!

I knew something was amiss when the “season ending” music came one ten minutes before the actual hour. What would happen? One last attempt at Tamra and Vicki making up. Nice try Brianna! Even if they did make up, the Reunion kills all hope for friendship… especially if you are on opposing couches. You know that Vicki and Kelly will be sitting together… until Brianna sits in between them.

Now THIS was a show! I would never call in with a bogus question to ask something that TOTALLY brings up some shit that never made it on the show! Who is Frank? I tell you, it was confusing, but (sorry, Andy) I totally cared! I was all over twitter trying to find out who Frank was and who put these people up to calling in! 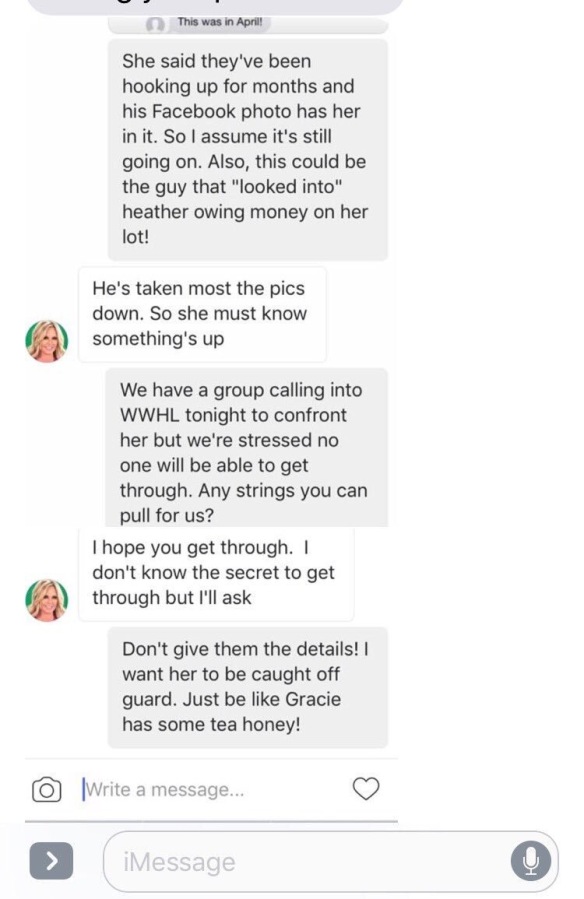 This is why we fans love our Bravo! WWHL is seriously the best thing! Thank you Andy! Cannot wait for the reunion!

YAY! I made the #RHOC Social Edition! (A crossover tweet is always a winner) 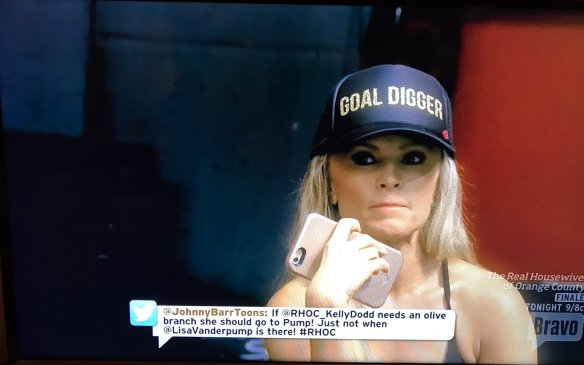